The currency is subject to some volatility, and the country is vulnerable to capital outflows should there be adverse internal or external developments. 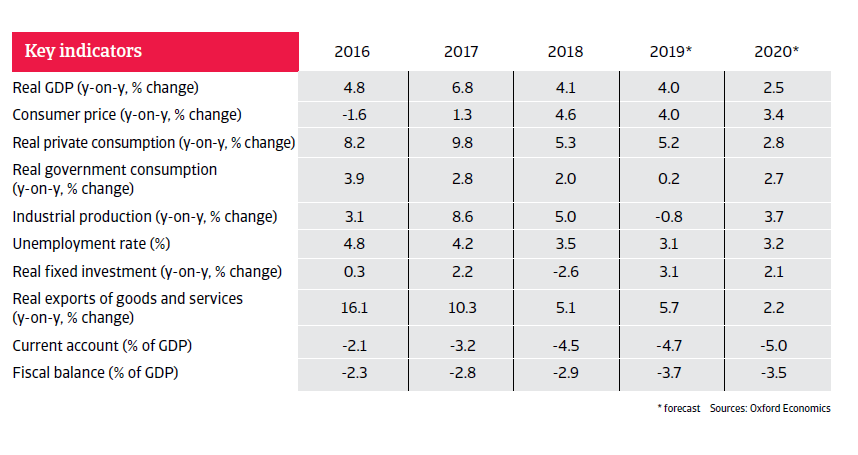 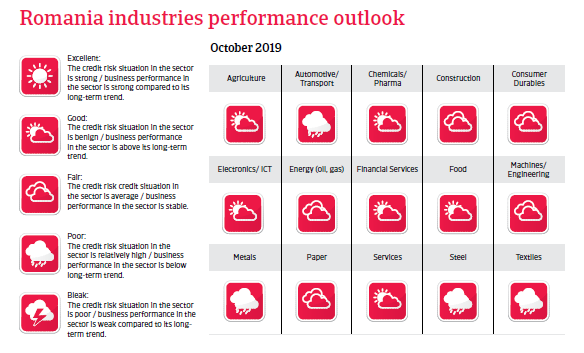 Corruption and graft remain major issues in Romanian politics and economics, and popular dissatisfaction and distrust with the political system run deep. The current government has repeatedly attempted to pass decrees that would decriminalise certain categories of abuse of power and corruption cases and to bring the judiciary under political control.

End of August 2019 the coalition government between the social democratic PSD and the liberal ALDE party collapsed after ALDE announced it would leave, citing a loss of trust in Prime Minister Dancila after she announced she would run in the November 2019 presidential elections. This leaves the PSD with 205 members of parliament, far short of the 233 needed for a majority. While Prime Minister Dancila announced that she will try to form a new majority in parliament, the main oppositional parties want an early vote of confidence in order to achieve a snap election.

Romania has shown robust GDP growth rates over the last couple of years. However, GDP is expected to grow at a much lower pace in 2020, mainly as export growth and domestic demand are cooling down. The positive effect of fiscal stimulus (tax cuts, minimum wage increases, public sector wage rises) on household consumption has abated.

The slowdown is also due to interest rate increases since early 2018 aimed at combating rising inflation. As consumer prices have started to decrease again in August 2019 the Central Bank left the benchmark interest rate at 2.5% for the time being.

The Romanian banking sector has continued its trend of substantial improvement in 2016, with rising capital adequacy ratios and decreasing non-performing loans. However, the sector is still subject to elevated credit risk due to foreign exchange mismatches and low credit growth.

The budget deficit increased since 2016 due to expansive fiscal stimulus, and in 2019 and 2020 the deficit is expected to widen further, to about 3.5% of GDP. This leaves the government budget more dependent on a positive economic outlook, and there is still an urgent need for improving tax administration. However, the public debt remains moderate (below 40% of GDP) despite increases.

Another issue is increased macroeconomic imbalances. Besides a higher public deficit, the current account deficit is expected to remain above 4% of GDP in 2019 and 2020 due to the coupling of elevated import demand with lower export growth. The currency is subject to some volatility, and the country remains vulnerable to capital outflows should there be adverse internal (e.g. a major political unrest) and/or external developments. 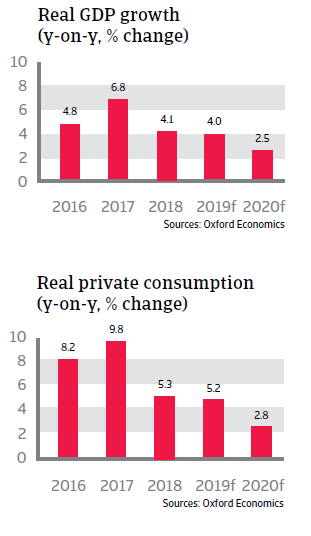 Low government debt and a flexible exchange rate serve as buffers. While international reserves are still sufficient for the time being, they have decreased below five months of import cover.

Economic growth in Eastern Europe is projected to remain solid this year, despite losing steam mainly because of poor growth prospects for Turkey.