A major increase in insolvencies is not expected for the time being, but cannot be ruled out should the trade dispute with the US further escalate. 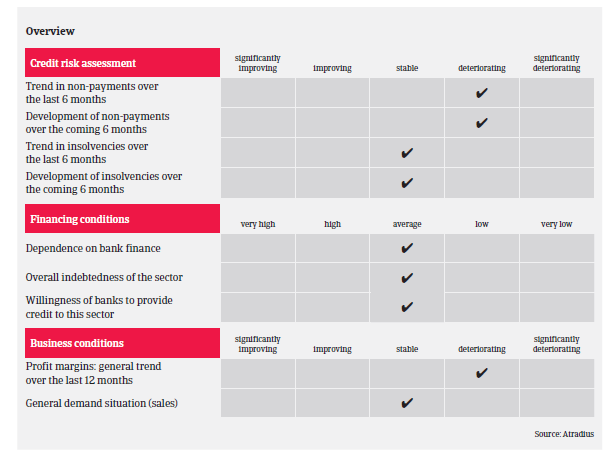 According to Fitch Solutions, the Chinese ICT market grew 8.2% in 2018, reaching a value of CNY 2.86 trillion. Over the coming three years domestic demand should be sustained by the liberalisation of the service sector, modernisation in education and healthcare, smart cities, and the Internet of Things (IoT). Additionally, increasing disposable incomes support discretionary spending on IT-related equipment.

Penetration rates of business hardware, software and IT services are still low in China. The Chinese government has earmarked the ICT sector as crucial for its next economic development stage, and subsequently enacted policies to support the development of cloud computing and advanced manufacturing. 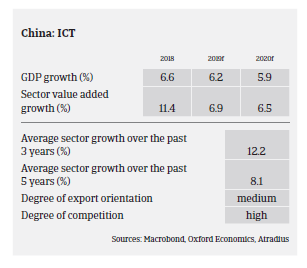 For ICT manufacturers, competition is getting fiercer. Oversupply in some subsectors like panels, printed circuit boards and lithium batteries has caused worries about price wars. At the same time, surging labour costs weaken China’s cost advantage, especially against competitors in Southeast Asia. According to the World Bank, China’s labour costs are twice as high as in Indonesia, the Philippines, Thailand, and Vietnam.

ICT distributors and retailers also face more challenges and risks. Most smaller players in this segment are ICT distributors with only one or two brands, and as the ICT market is a fast changing one, such companies are exposed to elevated risks due to their highly concentrated product portfolios.

The ongoing trade dispute with the US puts pressure on the ICT market’s growth rate. Potential US import tariffs of 25% on all Chinese telecom products and smartphone components, including displays and circuit boards, could slowdown revenue growth for telecom equipment makers.

The Chinese ICT hardware market is characterised by a high reliance on imports (about 87.5% of China´s IT imports are electronic components, due to be assembled in the mainland and re-exported). Due to higher tariffs, global IT companies could start shifting their production plants in China to other countries, which would have a negative impact on China´s ICT supply chain. A Renminbi depreciation would increase the overall cost for China's ICT industry as it heavily relies on imported technologies. At the same time, lower economic growth and lower consumer and business confidence triggered by the ongoing trade dispute would directly impact domestic ICT purchases.

The US decision to potentially block domestic and even foreign suppliers from doing business with the Chinese technology firm Huawei could have a major impact on the company itself and its domestic suppliers. Huawei is said to have stockpiled enough core hardware components in order to operate for 3-6 months or even up to a year. However, it seems to be more difficult for Huawei to replace software supplies. In any case, the company has to find a solution for high-quality hardware and software supplies in the medium- and long-term.

On average, payments in the ICT industry take between 30 and 60 days. Due to the difficult market conditions, payment delays are expected to increase in 2019. A major increase in insolvencies is not expected for the time being, but cannot be ruled out should the trade dispute with the US and the Huawei issue further escalate. 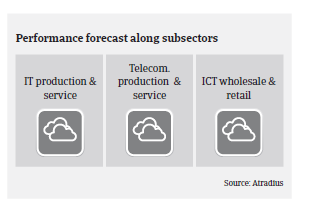 A market downturn would increase the risk of moral hazard, as some players may bet on one-off deals to make money and disappear from the sector afterwards. Transparency issues remain one of the main challenges in the Chinese ICT sector, as ownership of businesses and group structure are not always evident and there are often different sets of financials. Cross guarantees are widely used in bank lending to ICT traders, meaning that one company’s liquidity collapse could drag down others.

Our underwriting stance is neutral to cautious, given the major challenges mentioned above. We currently assess the impact of the trade dispute and the Huawei issue on the whole Chinese ICT supply and value chain.

ICT producers are facing fierce competition, and their performance could be severely impacted by the Sino-US trade dispute. In this segment we assess business profitability and the import/export share for our risk assessment. For service providers sales are usually on a project basis, which are easily delayed.

Generally, we are more restrictive with smaller ICT distributors, system integrators, and online retailers, as in those segments competition is fierce and the financial situation of businesses is often weak.

World trade growth stagnated in Q1 amid the escalating trade war. While we expect some recovery in 2019, further escalation of the trade war could grind growth to a halt.

Profit margins of retailers in the online segment to increase slightly in 2019, while brick-and-mortar retailers face continued margin pressure.