Western Europe: an increase in past due B2B invoices

After a minor increase from 2016 to 2017, the proportion of past due B2B receivables in Western Europe increased again this year and stands at 41.8%.

In 2018, Atradius Payment Practices Barometer survey respondents from Western Europe reported an increase in past due B2B invoices. The majority of respondents (57.9%) said that they felt the impact of payment delays having to postpone their own payments to suppliers and even losing revenue. Like in 2017, the main reason for payment delays was insufficient availability of funds. The proportion of uncollectable B2B receivables remained stable at 1.3% and most respondents in the region declared that the customer going bankrupt was the main reason for write-offs. 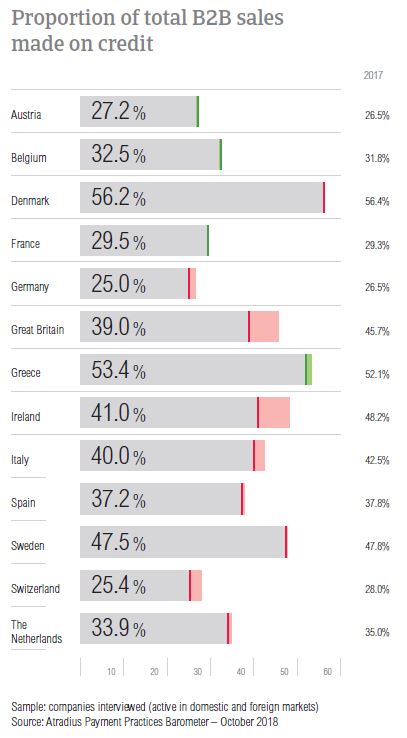 The proportion of B2B credit sales in Western Europe decreased from an average of 38.8% in 2017 to 37.4% this year. This was mainly due to steep decreases in Ireland (by 7.2%) and Great Britain (by 6.7%). With an average of 56.2% of B2B sales transacted on credit terms, respondents in Denmark remain the most inclined to offer credit terms. In contrast, with an average of 25.0%, respondents in Germany are the least inclined (even less inclined to offer credit terms than in 2017, when the average proportion of B2B sales on credit stood at 26.5%).

We trade on credit with regular customers, with whom we have built long-term partnerships and whom we trust. New customers are granted trade credit only if we believe that the business relationship will last longer.

Businesses in Western Europe seem to grant trade credit to foreign B2B customers mainly for the same reasons, to nurture already established relationships and to attract new customers. Respondents said that credit sales provide flexibility and it’s much easier to use this method of payment. 33.9% of Western European respondents said that they refuse to grant credit terms to their B2B customers abroad if they lack information on their customer’s business or payment performance. Other main reasons for refusing credit sales are high economic or political risk in the customer’s country (mentioned by 26.7% of respondents) and poor payment behaviour (22.1% of respondents).

We trade on credit because we would like to increase foreign trade and because we believe that this is very profitable and easy.

In 2018, the average Days Sales Outstanding (DSO) figure recorded in Western Europe is stable at 44 days, showing no change compared to 2017. 62.8% of respondents in the region said that they do not foresee changes in their company’s DSO over the next 12 months. 21.0% of respondents mentioned that they expect an increase while 16.1% foresee a decrease. 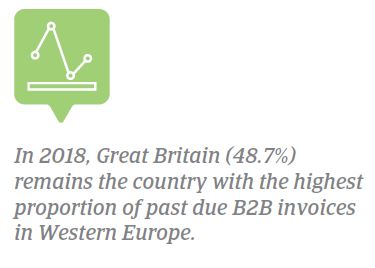 57.9% of Western European respondents reported having felt the impact of payment delays 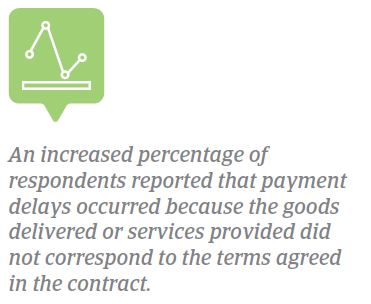 In 2018, domestic payment delays in Western Europe occurred mainly because of insufficient availability of funds (47.3%), buyers using outstanding invoices as a form of financing (30.9%) and because the goods delivered and services provided did not correspond with what was agreed in the contract (20.0%). There was a significant increase in the percentage of respondents reporting this last payment delay factor (from 13.3% in 2017).

31.7% of respondents stated insufficient availability of funds by foreign B2B customers (34.6% in 2017). The second most frequently cited reason for payment delays by B2B customers abroad was the complexity of the payment procedure, stated by 27.3% of survey respondents; a slight decrease compared to 2017 when it was 30.7%.

The majority of respondents in Western Europe (57.9%) said that payment delays affected their businesses. Of these, 18.0% had to take specific measures to correct cash flow, 16.8% reported that they lost revenue and 15.9% that they had to postpone payments to their own suppliers. 42.1% of Western European respondents said that overdue B2B invoices did not have a significant impact on their businesses. 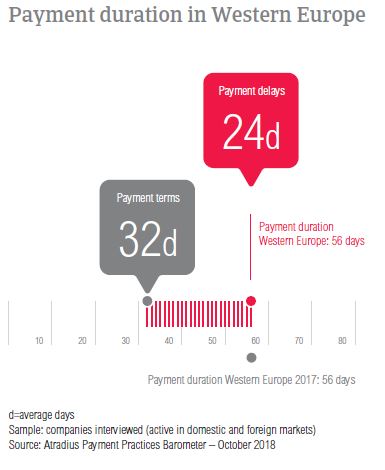 The fastest/slowest invoice to cash turnaround in Western Europe

According to our survey findings, the second most significant risk to global growth is geopolitical risk (19.6% of respondents mentioned this). Businesses trading internationally do not seem as concerned about the US Fed policy or a potential ‘hard landing’ in China. These were considered to be the most significant risks to global economic growth by 19.3% and 16.3% of respondents respectively.

Bankruptcy – once again the main reason for write-offs 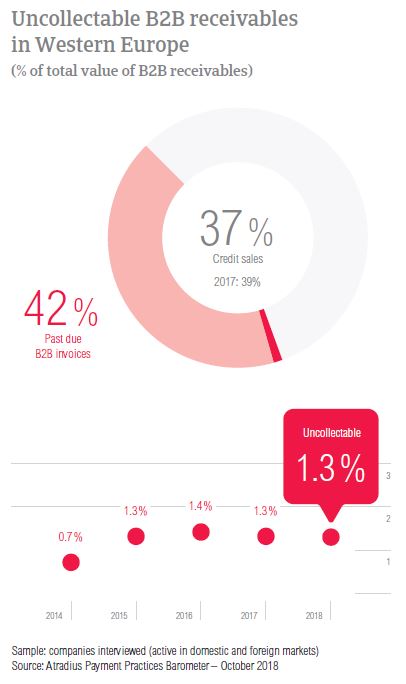 Uncollectable receivables in Western Europe originated most often from the construction, consumer durables, business services and services sectors. B2B receivables were reported to be uncollectable mainly because the customer went bankrupt or out of business. This view was shared by the majority of respondents in Western Europe (57.1%, slightly down from 58.3% in 2017). Secondary reasons were the failure of collection attempts (cited by 28.4% of respondents) and the additional, high costs to pursue the debtors (cited by 27.8% of respondents). 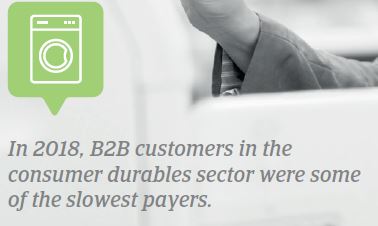 B2B customers of respondents in the construction materials and consumer durables sectors seem to take the longest to pay. Domestic and foreign B2B customers in these sectors paid, on average, 31 and 27 days late. Similarly to what was stated for the region overall, the main reasons for payment delays were insufficient availability of funds and buyers using outstanding invoices as a form of financing.

Looking at changes over the coming 12 months, 38.0% of respondents in construction materials do not expect any changes in the payment behaviour of their B2B customers. A slightly lower percentage, 34.0% expect deterioration. Most respondents in the consumer durables (54.0%) sector do not foresee changes while 25.0% foresee deterioration.

With Atradius Credit Insurance you can trade with confidence and explore new markets or products, knowing that your business is protected against credit risk such as the insolvency of your customers.

The global economy is in an upswing based on broad-based economic growth and still-low interest rates, but we are reaching a turning point.

British business insolvencies are expected to rise again in 2018, mainly affecting businesses active in the construction, retail and hospitality sectors.