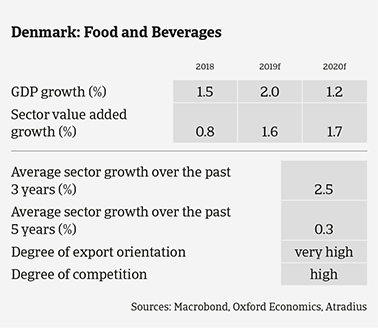 According to the Danish Agriculture & Food Council, two thirds of Danish food production is destined for exports, with Germany, UK and Sweden the top three destinations (the EU as a whole accounts for two thirds of all food exports). The fourth largest market is China, which has recently seen a large increase in Danish food exports (mainly pork carvings).

The main commodity exports continue to be pigs and pork meat (18% of sector exports), fish and seafood products (15%), and milk and dairy products (13%).

In general, large Danish food businesses are active globally and performing well, while smaller manufacturing and trading companies supply the domestic market and/or export to closer markets in the EU. In those markets consumer habits have changed due to health and ecological concerns, away from “traditional” protein towards fish/seafood and organic protein products.

With its high dependence on exports, free trade and open markets are crucial for the Danish food industry. Issues like the ongoing Russian import ban and the escalated US-China trade conflict had a negative impact on Danish food exports. However, this impact is often only temporary, as the basic demand for food remains in many markets. Higher demand for substitute products and/or changes in sourcing and trade routes provide oppurtunities for many food trading businesses operating internationally.

While Brexit was originally perceived as a major downside risk for Danish food businesses with large exports to the UK, the prospect of deteriorating sales has meanwhile abated somewhat. Several Brexit postponenements have provided businesses with sufficient time to adapt to any adverse scenario.

Domestic food retail is dominated by a few large players, and in recent years turnover in the discount retail segment has expanded, while remaining flat in the “traditional” food wholesale and retail segment. Annual sales of food via retail amount to EUR 5,200 per household, and the discount segment has a market share of more than 40%. Online sales of food account for 4% of total sales but show high growth rates, as the first “digital generations” reach adult age and parenthood.

Payments in the Danish food sector take on average between 30 and 60 days, and the payment experience over the past three years has been good. Although still at a low level, the number of payment delays has increased in 2019, and is expected to rise further in 2020, although at a slow pace. Mainly affected are small and medium-sized food processors under pressure from retailers. The insolvency level in the industry is low and the outlook for 2020 is stable, with no increase expected.

Our underwriting approach remains open across all subsectors. That said, we closely monitor the fierce competitive environment in domestic food retail, paying special attention to the many smaller players. Those businesses either need a niche or tight customer relations in order to avoid falling victim to market price pressure. We continue to monitor food businesses dependent on exports to the UK, taking into account that many of them seem to be better prepared for Brexit than in the past. 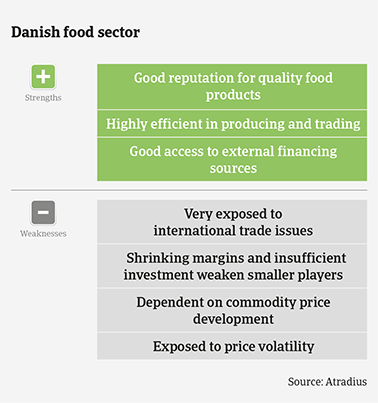 Economic growth in Denmark is forecast to increase to 2% this year.

The global economy is losing steam in 2019 and 2020. As the trade war accelerates this, consumer resilience will help avoid recession.

As economic growth decelerates, and the manufacturing sector struggles amid lower global trade, Western Europe expects to close the year with a 2.7% increase in insolvencies.